For many years, I have been watching a lot of Belgian cyclocross races on YouTube thinking how awesome it would be to go over there and see how hard, brutal, fun and how different they are from North American races. After countless hours spent on the rollers watching these Belgium's semi-god battling thru mud and rain in the World Cups, Superprestige and Bpost Bank Troffee series, I decided that this year was my time to get into the game. This year, I feel like I'm starting to get at a good level in CX racing. I now have the necessary equipment, a qualified coach helping me with the crucial preparation for these events and the help of Cycling Canada supporting athletes hoping to compete in these races with the Belgium Project.

I left home (Quebec City) on December 14th for an 8 week trip in which I would race 3 World Cups, 2 Superprestige, 2 BpostBank Troffee, 1 Soudal Classic and the World Championship. I have now completed Belgium's Keerstperiod (Christmas Period) which is composed of 6 international cyclocross races within only 9 days. Some call it the Tour de France of cyclocross.

Apart from the atmosphere and the 'WOW factor' at the race venue, there are several differences between a Belgian and North American 'cross race. Obviously, since most of the races in North America are held in public parks, it is very different than racing through muddy fields during the winter months of northern Europe. The courses are also laid out very differently, there are very few coasting sections (smooth grass, gravel, ect) compare to what we are used to in North America. Steep ups, steeper downs, deep rutted mud, slippery off cambers and rough terrain; there is no time to coast or recover, always something challenging, someone trying to overtake you. Dry 'Grass crit' are very rare and riders usually prefer heavy mud and technical challenging races.

If one trains to race in Europe the demand of the sport varies a little bit and it would need to be reflected in your daily training. Pushing your comfort zone on training rides and riding MTB trails at full speed on your 'cross bike would actually be a great idea. Running is also a very important aspect of the races in Europe. If you barely have to run in an average 'cross race in North America, a Belgian race can be won or lost based on someone running skills/ability. Don't forget to practice some mount/dismount/run during bike practices! 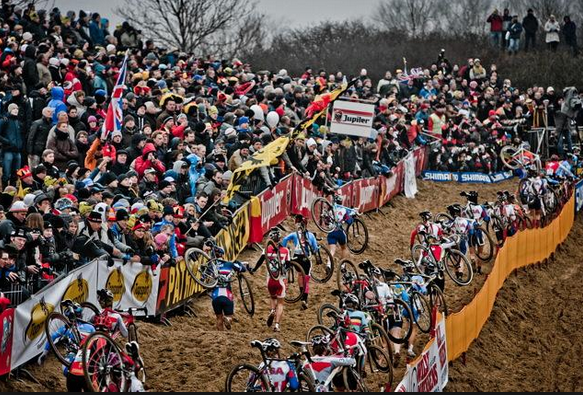 On 99,9% of the races I've done so far, there seems to be a very strong trend: The younger generation tries to get rid of the older riders such as Sven Nys, Pauwels or Vantournout. The first 20 minutes will usually be unbelievably fast, something I have never experienced in any MTB races or North American 'cross races. First laps at ~30km/h average speed on hilly/muddy courses are not rare... This is if you are strong & lucky enough not to be caught in the early race chaos/traffic. Except if you are Chris Hoy, a lot of supra-maximal kind of efforts should be included in your training. Get a coach, someone who knows how to actually get you faster. Because in Europe, it becomes a necessity. 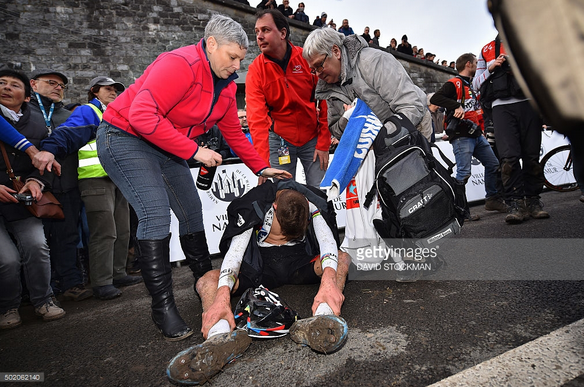 How sharp are your elbows?

I hope you are comfortable playing elbows with a bunch of aggressive dudes. If in North America everyone is very respectful of each other, it is far from being the case over here; younger riders won't hesitate to play elbows with Sven Nys or Pauwels. There is no hierarchy like what we see in North America, it is just plain chaos. So apart from training maximal speed and power on a regular basis, you need to be able to mentally be really aggressive; you won't make any friends during the races in Belgium.

Canadians tend to think they are great at riding technical sections and got this dialed. A cyclocross racer needs a very wide range of skills to be successful; it's not about being really good on steep chutes or being able to rail those fast grassy corners. You need to be good at everything, at maximum effort, all of the time. If you mess up a corner or two in a US Cup it's frustrating, but if you mess up a corner or two in Belgium, you'll end up 10 riders behind and probably dropped from that group wondering what just happened. And you don't want that!  The big thing I have realized over the last few weeks was my lack of bunnyhoping skills despite 'being a mountain biker'. I know what to work on for next year!

To make it simple and more understandable, here are the 3 points you should train and focus on if ever thinking about racing 'cross in Belgium:

A - Train on rougher type of terrain, there are very few smooth grassy courses in Belgium, the soil is very rutted and often very soft.

B- Be able to ride FULL GAS for 20 minutes and then settled into your normal 'cross race rhythm (which should still be crazy fast).

C- Get crazy and ride some gnarly stuff in training. Remember, there are good chances you're not the most skilled rider out here. Keep pushing through your comfort zone and watch a lot of Tom Meussen videos. 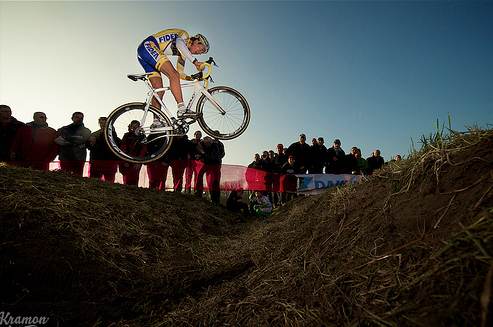 Oh...! And remember to always enjoy riding your bike :)